My first patch in Gecko

A couple of weeks ago, I decided to try and fix a Gecko bug (Gecko is the rendering engine of Firefox). So I hoped onto the list of mentored bugs and found one that I thought would improve the Web Platform and looked easy enough for my skills. I found this one : add support for background-size in background shorthand property. Gecko already supports the background-size attribute. But defining it into the background shorthand was not possible. So that was nice: a bit of parsing to change but no layout changes. I can do that. Also, the bug had detailed instructions on which part of the code should be fixed.

So it's now in Nightlies and will go through the various Aurora and Beta releases. It should be available to everyone early 2013.

And with this patch, I've multiplied by ten the lines of C++ I've ever wrote in my life. The other two lines are in WebKit. Which inspired me this meme: 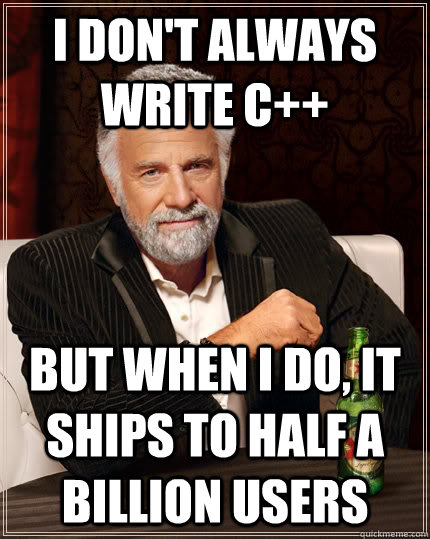 Just as a reminder because I never blogged about those, here are the other bugs I've worked on in Firefox: