Changes of the week

Everything mentioned below should work with the latest nightly available at the moment (35806).

I announced this implementation too early last week. Comparing to the two specs, associated events were missing.

New commands are available in the console. $, $$, $x, keys, values, profile/profileEnd, clear. You can find these functions descriptions in Firebug's documentation And don't forget the addition of console.dir to list all properties of an object. 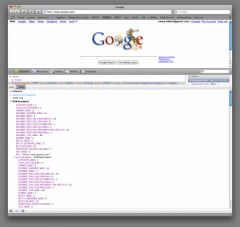 I'm not familiar with SVG but something like 80 tests were added to ensure the right behaviour of the engine. Especially, the elements line, radialGradient, image, marker, mask, cursor, pattern and rect are concerned. Some fixes were made in consequence.

When the inspector is inside a page, it is now possible to resize and close it. I waited a long time for this. This docked mode is now the default. And to finish with this, the inspector will remember in which mode you've let it.

In order to always get better performances, some tweaks were made :

This is everything for this week. Of course, this is just a selection I've made. If you've noticed any other interesting changes, please let me know. Same thing if I got something wrong.

Found the blog via Webkit's review queue. These weekly summaries are really useful. Thanks!